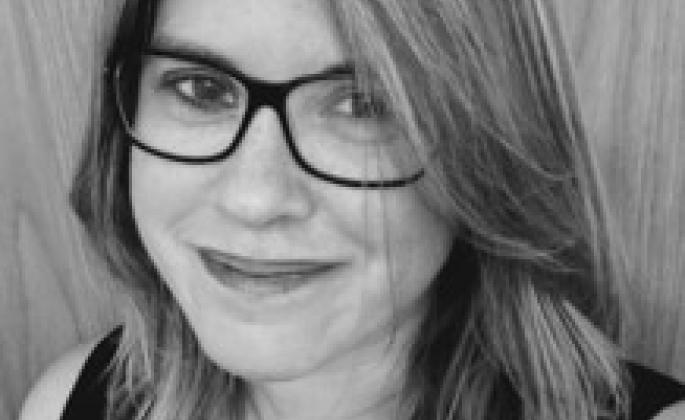 Alessa Rigal graduated in 2008 with a double major in French and Global Studies. She is currently  the Head of Human Rights and Ethics for the global food company, AM FRESH Group. Suzanne Toczyski interviewed Alessa via Zoom:

I majored in Global Studies and French with a minor in Spanish.  My degrees led me in the direction of working in the area of migration and humanitarianism.  I did my Global Studies dissertation on the social effects of migration into Spain as compared to Ireland.  When I first arrived in Scotland, I got an internship working with asylum seekers for the British Red Cross, and because of the policy of free movement in Europe, it was a bit different from migration in the U.S.  I helped welcome people to the city, went with them to appointments, ran a community drop-in center every week, and tried to point people in the direction of how they could feel at home in Glasgow even though under British law, they were not allowed to work while their case was being assessed.

How did you find your internship?

I went to the volunteer center in the city, but as I genuinely had no direction at the time, I explained my interests which led me to the role.  Initially, it was a two-moth unpaid internship, which later turned into a paid job where I worked for a year.

Tell me about your trajectory after the British Red Cross.

I moved south to Birmingham in England, after a year in Glasgow where I moved into a role with the British Refugee Council while working on my Masters in Globalization and Development at the University of Warwick.  At the BRC, I worked with asylum seekers who had just gained refugee status and were now legal residents, as well as with destitute asylum seekers who had exhausted their case and were in appeals whilst remaining in the country.

I earned my MA in 2010 and then moved to London.  I was offered another role with the Red Cross, this time in their headquarters, where I worked with refugee services to put in new systems to support the different regional offices around the country that provided refugee services.  Eventually, the power of networking came through and I found a job with one of the Big 4 accounting and consultancy firms, KPMG, working in international development.  At the time, the UK division wanted to revamp their reputation in the UK, so I spent six months on a development aid watchdog project.  I then carried on in that international development consultancy space for another two years, managing projects funded by the EU and UN institutions such as the World Food Program.   Finally, I moved into workers’ rights, which is where I still work now.  I initially worked across sectors – clothing, and agriculture, but then moved into being food-focused. I lead projects focused on addressing workers’ rights needs within agricultural supply chains. It was in this role where my language skills really came into play.   I regularly engaged and presented to Moroccan government officials’ evidence on the need to support their growing export industry, which came from a project collaborating with OXFAM, British supermarkets and their importers.   We tried to work closely with the growers to be sure the rights of female strawberry pickers were not being taken advantage of.  With OXFAM, my organization, the Ethical Trading Initiative (ETI), as a neutral party facilitated annual meetings in Morocco to engage with different government ministers (agriculture, transport, etc.) to make improvements in the agricultural sector. I did this and similar projects for five years in countries around the world – Morocco, Italy, Spain, Peru, and the UK.

I am now exactly where I wanted to be, I’m the Head of Human Rights and Ethics for a global food company, AM FRESH Group, who ready to take on change and move forward in sustainability efforts. Things I am currently working on include putting in place foundational elements, such as launching a human rights strategy, as well as looking the specific like how to address the gender pay gap, retaining women in the business, enhanced worker representation and more, whilst simultaneously taking those lessons and applying them to our supply chains.

Both my French major and my Spanish minor have helped. The first time I used French in a work setting, I was presenting to several French supermarkets to encourage them to join our project in Morocco.  It was daunting, but we got a lot further because I spoke to them in French instead of presenting to them in English – and they thanked me for that. In previous roles, my language allowed me the ability to speak to asylum seekers from French speaking countries. Languages provide an opportunity to connect with people in a different way than when you have that language barrier and rely on an interpreter.

I would encourage them to think about what interests them.  There is an opportunity if you want to incorporate speaking languages in any job; it depends on how you frame it.  Say you are good at sales, and you can apply that within a language-speaking context, it just depends on the organizations or spaces you look at.  When I got the job with the Red Cross, I soon realized that I wanted to be in the humanitarian space. Through the different roles I’ve had, I couldn’t have told you I would end up in the workers’ rights, but the role was appealing, and since then that appeal has turned into a passion which continues to speak to me, allowing me to constantly take on new development opportunities.   I knew I could take it in a host of different ways, depending on how I worked, and I knew I could use my languages no matter what I was doing.  You need to go looking for it if it’s what you want.

My biggest piece of advice is absolutely study abroad. I knew before getting to Sonoma that I wanted to study abroad and within two weeks of arriving, had sorted out what meetings to go to and whom I could talk to and learn more.  It’s a fundamental, pivotal experience – I went to Paris, France for a semester and to Granada, Spain for a year, though sometimes I wonder what would have happened if I had flipped my time, a year in France and a semester in Spain. I’ll never know!   If you do make it abroad, try your best to branch out, meet others from the country where you are and more widely. If you are there to learn a language, don’t live with English speakers, use that language you are learning to keep you connected, or maybe try living with a family or on your own, each have their advantages.

I’m hoping to stay where I am for a while – it’s only the beginning of what could be great.  Time will tell – I have a vision of what I want to do; let’s hope my team and I can continue to convey the needs for change to the business and we can continue moving forward.  Of course, I have only started the role in January and thankfully have been able to work from home through the pandemic. Despite many businesses struggling, ours is flourishing, as we supply fresh fruit and vegetables globally.  Our office is in the same building as one of our biggest pack houses, so through lockdown we have had workers on-site daily. Working closely with my colleagues, I am confident that we’ve been looking after and protecting the staff who are there through it all, as we know what will happen if we don’t take steps to protect people, both morally and from an economic perspective. I am happy to be working both in a role and for a company that takes pride in its people and has been there for the wider public in providing them with the food they need as we get through this pandemic together.

If anyone is interested in learning more, they can check my LinkedIn profile (https://www.linkedin.com/in/alessa-rigal-74881019/).  Or, if as a student you want to reach out and talk more directly, they can get in touch through to my work address (alessa.rigal@amfresh.com)

Learn about other French alumni