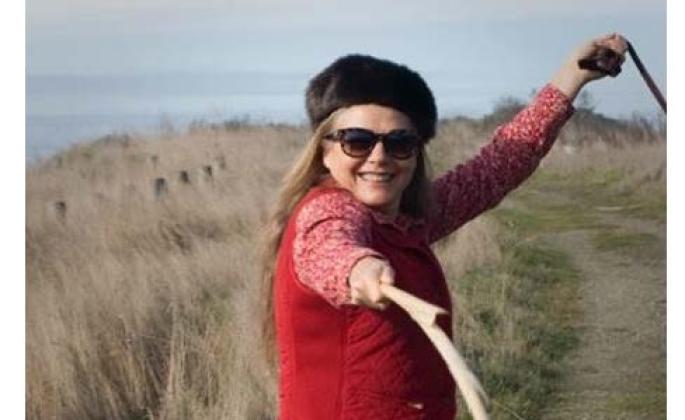 Dr. Christine Renaudin earned an MA in Modern Literatures from the University of Paris IV-Sorbonne, and a PhD in French Literature from Cornell University. Her first trip to the United States came when she spent a year as a Fulbright Language Teaching Assistant at Scripps College in southern California.  She then went on to teach at Paris IV-Sorbonne, Tufts, Cornell, and Vasser.

Christine arrived in Sonoma County in 1990 and knocked on the door of then department chair Bill Guynn to see if he had need of an additional instructor in French.  After teaching as an adjunct at SSU for eight years, Christine was hired into a full-time, tenure-track position in what is now the Department of Modern Languages and Literatures.  In that capacity, she taught all levels of French language, culture, history and literature, with a particular emphasis on classes focusing on 19th- and 20th- (and eventually 21st-) century France and the francophone world.  She also served as chair of MLL for nine years (2010-2019), and then continued in like fashion as interim Director of the Hutchins School of Liberal Studies, and also as Chair of the Departments of Art and Art History and Theatre Arts and Dance.  Before participating in the Faculty Early Retirement Program, Christine served for one semester as Associate Dean of Arts and Humanities.

In 2018, Christine was awarded the CSU Faculty Innovation and Leadership Award for her work on the SYRCE (Sophomore Year Research and Creative Experience) Program, a multi-disciplinary venture housed in the School of Arts and Humanities.  She also coordinated the SYRCE program for five years, starting from its implementation in 2014, and also taught the Theatre Arts & Dance section of the program multiple times.

Christine’s own research subjects ranged from the eighteenth-century philosopher Voltaire to the Algerian author Malika Mokeddem to Haitian ex-pat writer Lilas Desquiron, with excursions into the work of Virginia Woolf, Camara Laye, and Paul Verlaine, to name but a few.  Christine has also translated the poetry of performance artist Christina Svane into French, and has become an accomplished painter in her own right as well.

While teaching in MLL, Christine also performed in productions staged by both the Theatre and Dance programs, (both directed by emeritus faculty Paul Draper) and various dance performances with the Anne Woodhead Dance Company, among others.  With time, Christine came to envision, direct and perform in her own productions as well, staging the multimedia performances Verlaine, Muse and Music Maker in 2005, Letters Interactive in 2012, Weaved in 2015, and Thursday Rains in 2016.  She also co-founded a contact improvisation collective called Lezokiparl, and continues to lead monthly events under the auspices of West Marin Contact Improvisation.

Hollis Robbins, Dean of the School of Arts & Humanities, says "Christine Renaudin exemplifies the teacher-scholar-artist model that has attracted and served so many Sonoma State students so well for decades. Christine and her commitment to joy and excellence will be missed."

Christine retires from Sonoma State University in 2022, having received the second annual Arts and Humanities Dean’s Legacy Award, honoring her for service and leadership that have made a lasting impact on the School.