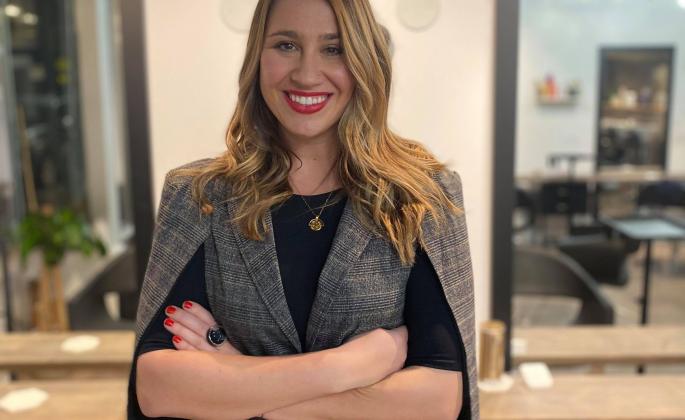 Jenna Riggan graduated from SSU in 2012 with a BA in French and a BS in Business Administration with a concentration in Wine Business Strategies.

I had a rough idea.  I knew I wanted to get into the wine industry and French was a very beneficial language for that path.  I also knew I wanted to go abroad and travel and I knew French would be a valuable asset.

I started out as a Wine Business major with a French minor.  When I studied abroad, I decided to add the French major.  While it was tricky to get my schedule organized, the double major absolutely influenced my career path.  I enjoyed both programs:  the BS in Wine Business and BA in French.  I think the double major provided a well-rounded experience, with a focus on the wine industry and business, and then the use of French gave me a competitive edge in interviewing.  The career director for the business program got me a few interviews because the people hiring were specifically looking for someone who spoke French.

I was in the Wine Business Club for a while, first on the board and then as president in my final semester.  I was also active as an RA in residential life.  I did a lot of internships in the wine industry – Sonoma State is perfectly located for that.  I tried to participate in French Club activities as well.  French came in handy in my internships.  For example, at Sterling Vineyards, we often had French guests and I could converse with them.  I had a scholarship because of the French and Wine Business combination as well.

Before graduating in December 2012, I was working part-time at a winery while I finished fall classes. I didn’t take a break; I went right into a full-time job with Amcor, a packaging supplier in the wine industry.  A lot of European companies support the wine industry in that way.  While my background in business was essential, it was the French background that landed me the job.  I started in marketing; the general manager of the northern California branch is French.  We used French every day.  The company’s mark headquarters are in Paris and I travelled there frequently.  We had several plants in France that I visited. They invited me to take over the mark manager position In Paris, in the corporate offices, for four months.  I stayed with Amcor for five years.  When I used French working in the U.S., it was conversational; using it in Paris professionally really solidified it as working, professional-level French.

Then Amcor moved me to Seattle, into the sales department.  During that time, while at a trade show, I met the president of Saverglass [which manufactures, customizes and decorates high-end glass bottles], we spoke French, and he recruited me to come work for them, so networking in French led to my current role. I joined Saverglass in 2018 and am now a market manager for their French line.  My French is very useful, even more than in my previous position: I have conference calls with France daily, and travel there several times a year.  I also get responses quicker if I write in French.  French has been a great networking option – very useful in terms of a competitive edge.

How is working in an international setting different?  What challenges or benefits have you found?

I am always jealous of the French vacation in August; they shut down while business goes on here, though it does slow here.  That is changing, but those of us in the States have to plan around it, postponing things to September.

It’s been really nice this year to connect with people in other countries to hear how the pandemic is affecting them.  We have different ways of working, French people and Americans – for example, in the U.S. we have to “have it tomorrow” for customers, from a business standpoint; whereas the French like to take their time and think things through – there is not the same sense of urgency as in the States.

From a sales position, in the U.S., there’s the “the customer’s always right” mentality; the French are prouder and set limitations – training the customer to understand that there can be more of a balance.  My job is to find the middle zone between the customer’s perspective and the business’s.  The French also give very long presentations, whereas Americans tend to be quicker.

First, don’t be afraid to use your French!  On one of my first times in Paris, I was intimidated and worried I’d make mistakes.  Use it as much as you can, talk to people – you will make mistakes and may never be 100% fluent, but people are happy to help and happy to see you speak the language.  Also, travel abroad – study abroad, or go to some French-speaking places. Immersing yourself really cements the language skills.

Regarding Wine Business and French – if you’re even thinking about French and Wine Business, do it – absolutely. French will be beneficial and will open doors.  It’s very useful; there are a lot of French companies, so the language gives you a distinct competitive edge.

I think I’ll still be in the wine industry.  I have plans maybe to one day go to France and work there – I would love to have that international experience again.  I think there’s definitely a future here, though.