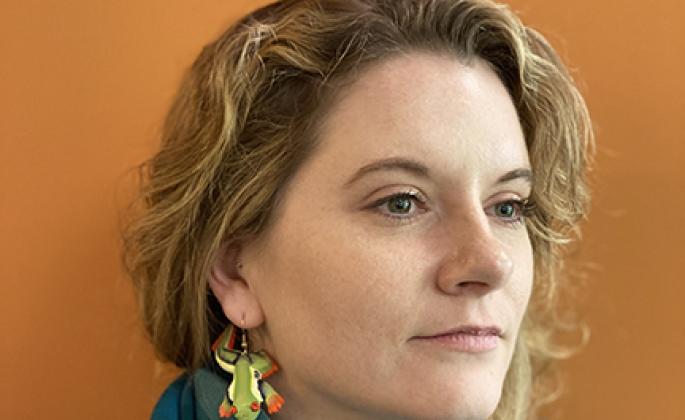 I was a double major in French and Studio Art.  The Art Department encouraged graduate school, so I considered pursuing a graduate degree once I got into the BFA Program, after my return from studying abroad in France for two years.  My mom encouraged me to study abroad in Aix-en-Provence, and when at the end of a year, I finally felt I was understanding responses to questions, that made me really want to get a handle on the language, so I stayed for a second year in Paris.  What I learned about language through study abroad, and the tools it gave me to challenge what I knew about the world, were important factors in my decision to pursue an MFA.  I wanted to continue to be in an environment that was curious and critical while advancing my learning.

Once I learned another language, I realized your whole world could change fundamentally, which got me interested in critical thought.  I hadn’t realized before that I wanted to teach, but now as a professor I teach a lot of visual language and there are a lot of ties to spoken language.  For example, the petroglyphs of New Mexico existed before verba language.  I now live in Albuquerque, where we have many historical and cultural sites featuring ancient rock carvings from the Pueblo people. The Petroglyphs National Monument features 25,000 rock carvings that use symbols as a form of communication. While its hard to say for sure if they were only communicating visually, it is a glimpse of how visual communication has been used for thousands of years. My experience learning a different language and culture in France influenced me as an educator. I now want to be aware of the significant cultural ancestry that is important to New Mexico so that I can better relate topics in art to history, language, culture, etc.  To even teach art effectively I had to understand how culture and geography shape society.  Visual language is how our eye moves through art – we can guide a person to look at art by giving them a visual map, and helping them to understand what the artist wanted to convey.  I primarily teach students how to see, how to look actively, how to uncode visual language.  Students who speak certain languages (including Chinese, Arabic or Hebrew) might from right to left or from top to bottom, and that conversation about how the eyes move informs the discussion.  People who speak these languages might look at a work of art from the right first, then from the left.  Graphic novels and manga books are a good example of this.

When I left SSU, I went straight to graduate school to pursue a Masters in Painting at the Tyler School of Art at Temple University.  It was a two-year program; I completed that in May 2017.  From May 2017 until spring 2020, I have served as an adjunct faculty at several colleges:  Tyler School of Art, Widener University, Delaware County Community College, and the Pennsylvania College of Art and Design.  In March 2020, I accepted a tenure-track position as Assistant Professor and Fine Arts Coordinator at the University of New Mexico-Valencia.

In the arts, it’s very competitive to get any teaching job.  I was working at a coffee truck, for the artist who had built the truck and the business, and who was working as an adjunct in the Foundations Department at Tyler. He had to give up is classes to run the company, and I agreed to work for him again if he agreed to put in a good word for me with the department chair at the time.  He did, and I got an emailed contract to teach a class that started five days later -- without having ever met the chair! In Pennsylvania, I created a portfolio and sent it to every school within a fifty-mile radius and at first didn’t hear anything back, so I tried again, and eventually landed all of the local jobs I had there.

The reason I got the tenure-track job was, I think, that I had taught an innovative class called “Introduction to Visual Language,” and the chair at Widener contacted me to see if I could teach it as a lecture class, rather than as an art class.  That course then became part of the regular curriculum.  I think it was that innovative class that eventually helped me to land the job in New Mexico.

Is it hard to strike a balance between being an artist and a teacher?  Does the one inform the other?

Teaching takes a lot of time – I still need to find that balance.  The best way I have been able to create new work is by collaborating with art communities and on community projects, for example on public events.  I now have a studio in my house, which will help.  I have been sketching a lot.

Teaching informs my art, 100%. I think a lot about public service, and about being a direct liaison between the university and the community.  I’m currently working on a piece that is a direct commentary on the high costs of higher education, especially in the arts.  Twenty-year-olds have a hard time conceptualizing a salary they’ve never had a chance to earn.  In the liberal arts, jobs are harder to find and education should be inclusive of everyone.  As a new full-time professor, I am learning to navigate the relationship between two of my core values. I believe that a libral arts education is extremely enriching and important, but I am also aware that the cost of tuition does not support a diverse population of students nearly enough.

Definitely. The school that I work for now in my tenure-track position has a diverse student population. Through my experience learning French at SSU, I myself know personally some of the unique challenges presented to international or bilingual students. I believe having an awareness of these challenges that students may face allowed me to be a leading candidate.  For example, If I have bilingual students or students whose language is not English, I know to have everything online for them.  I also make sure there is always a written copy of my feedback on their art for them, so that they can read it rather than only hear it orally.

At the University of New Mexico-Valencia, the population is 65% Latino and Hispanic, so language is on my mind. There are also cultural differences that I can be attentive to because I have the experience of other cultures myself.  With some students, I can’t always use English phonetics, so I learn their names by asking friends for help with names that are challenging, and this makes the students feel more welcome.

Interestingly, my teaching philosophy in art is grounded in my experience of study abroad and learning another language.

A family friend told me that she didn’t take tests well, but that going to every class, never skipping, would put me ahead, so I did that very conscientiously.

I would encourage language students to double major.  Language is at our core; it applies to so many other disciplines and can help you learn to problem solve.  Project suggestions from the French faculty at SSU were very helpful. Finding subjects that you enjoy in another language helps you to engage with it more. For example, a project I did on the photographer Eugene Atget really influenced me.

Also, I wouldn’t be in art or in teaching if I hadn’t studied abroad – study abroad has inspired me to pursue art, because art challenges us about what we know about the world, the way language does.

The tenure-track at UNMV is six years.  I hope to be here, teaching and continuing to do my art.  I also hope to pick up some Spanish to learn more about the culture of the area in which I teach!